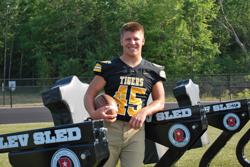 Greg was team captain, 1st team All Conference both ways and a WFCA Honorable Mention All State player. A leader in the building construction program, Greg also is involved in National Honor Society, Quiz Bowl, and Math League teams. Greg also volunteers for youth baseball & football along with the food shelf at church.

His coach says: “Greg added another layer of servant leadership by helping his younger brother Josh, who has Down Syndrome, be part of the football program. Greg would bring Josh to practice after school where Josh would run drills with the team, help managers with their responsibilities, and join the team in the weight room and film sessions. Greg’s decision to bring Josh in as part of the team has taught so many players life lessons, and given them a sense of brotherhood that other seasons have not had.”

Greg shares in his essay: “I have learned countless lessons applied to almost all parts of life through high school football. Football has taught me to fight through adversity and that if you want to achieve something, you will need to work for it. As captain, I needed to hold myself to a higher standard because I knew many eyes were on me, whether they were from teammates, coaches, parents, or younger players. I am so thankful for everyone who has helped me along my journey as a football player.”