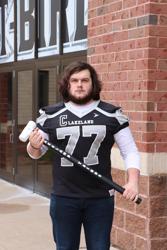 David was a 3 year letter winner and 2 time captain playing on the offensive and defensive lines. David’s servant leadership was evident not only on the football field but also in the Minocqua area helping to raise funds at the 4th of July Parade, specifically raising funds for the Honor Flights. David found a way to raise funds even with the parade cancellation due to the Covid pandemic.

David has helped to raise over $20,000 to send 40 veterans on the Never Forget Honor Flights. He has also been a leader in academic clubs such as Model United Nations, Mock trial, DECA, and FBLA. David also earned All Conference honors on the defensive line.

In his essay David says: “Football has opened many doors for me including forming countless relationships with coaches & players, building leadership skills, and having the privilege of stepping on the field and participating in the greatest game known to man. If it had not been for the opportunities presented to me through football, I would not possess the leadership skills to help others on & off the field.”