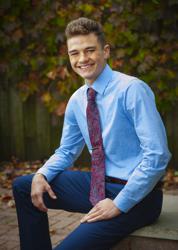 Carson participated in football, basketball, and track and field. He is a very active member in FBLA, NHS, Student Council, and FFA.

Athletic Director & Dean of Students: Carson has represented himself with a high level of self control. He is emotionally intelligent and patient with others, He does not seek attention or drama, but instead helps build relationships. Teachers are impressed by the way he analyzes things and applies it to his learning in the classroom. Many of these academic characteristics carry over to his ability to be a leader on the football field.

Coach: Carson is a young man who truly represents what a leader should be. This was the first season of our coop between two rival schools, and I cannot explain with enough emphasis how much Carson meant to our team. He lived and breathed one unified team that needed each other because we were a brotherhood, a family.  Carson went to both communities to recruit athletes to play and also lifted weights at both schools over the summer to build relationships and when he came in he dragged kids with him. Carson volunteered with everything the team did this year to serve the community. He participated in the aluminum can drive, the Rio community parade, and most importantly the youth football program. To the little kids in both communities Carson was the star quarterback and they were so excited to work with him. I often ask our athletes about legacy, “How do you want to be remembered? What do you want your legacy to be?” Carson will be remembered by these three things: team first, someone you can count on, and as a phenomenal human being.

Carson: The football season was a brand new start for almost everything. We had a brand new coop, a new coaching staff, and I was in a position I had never played before: quarterback. Football taught me how to triumph over adversity, how to lead in the toughest of times, and how to build a culture of mutual respect between athletes of two different schools. We created a winning culture, but that did not mean just winning games, that meant instilling discipline, integrity, a sense of belonging, and above all making everyone a better person. I worked hard to promote the cultural foundation so the players could become not just winners, but better members in their family and community. Football was the fire that forged me into a stronger individual. It has made me a better friend, family member, and contributor to my community. It was a journey well worth it.