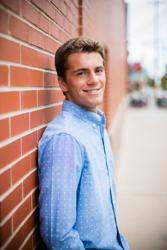 Dylan has been extremely active at Greendale HS. A member of NHS, Dylan also is involved with several student leadership groups. He has served as Percussion Section Leader on the Marching Band which performed at the Macy’s Thanksgiving Parade and in the 2020 Rose Bowl Parade. Dylan has also been very active in the Teens for Impact program, is a peer leader within the Sources of Strength School Climate and Wellness Team, and went to Badger Boys State last summer. He was also the Prom King & on the Homecoming Court.

Principal: I look at Dylan as a leader by example, the type of student that possesses all the traits we want in our students: top academics, involved in co curricular programs, willing to take risks, of high moral character, and an empathetic leader through active example and positive attitude. A great example of Dylan’s impact came this fall when a visiting head coach sought me out to share how impressed he was with #19 (Dylan) and the multiple instances of positive effort and extreme sportsmanship that he witnessed throughout the game.

Coach: In my 19 years at Greendale HS, among the thousands of individuals with whom I have been associated with,  Dylan very well may be the most well rounded, grounded, and accomplished student athlete I have worked with. Dylan was our team captain and a 1st team All Conference performer. Dylan is continually an active seeker for self improvement, which includes building improved strategies with which he can positively impact those around him.

Dylan: My main focus was to set the best example for our younger players and demonstrate a great work ethic and attitude. I finished the year with multiple accolades including Team Captain, All Conference, and a Pick’nSave Athlete of the Week nomination. More important than those was the Pulse of the Panther Award, chosen by my teammates as a way of acknowledging me as the teammate who contributed most as a leader and companion. Much of what I learned in football can be applied to the rest of my life. I have taken my leadership qualities to other areas of my school. My refined work ethic helps me be at my best in all aspects of my life. I am forever thankful for the lessons and character that I’ve gained from the game and my experience as a Greendale Panther.