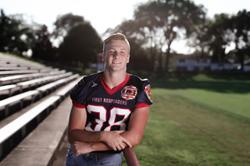 Dominic is an All Conference standout, team captain, and member of the Cardinal Leadership Team. He also participates in track and volunteers in the community. His community involvement includes youth football, Tuesdays in the Park with underprivileged children, Sunshine Place, Cards Closet, Memorial Day Run event, and Soup with Santa. Dominic is also active in DECA, being both a State Conference competitor and an International Conference competitor.

Administrator: What impresses me about Dominic is his sincere ambition and motivation to not only do his best, but also bring out the best in everyone around him. His positive outlook and leadership qualities are contagious among anyone he encounters.

Coach: Dominic has been instrumental in the success of our Cardinal Leadership Team. He is a leader among leaders. The amount of pride he takes in our community is second to none. He helped heal our community after an explosion shook our town a few years ago. He helped start a First Responder’s Night at our football game. Dom has impacted our program more than anyone to have come before him. His impact will be felt for years to come within our school & community. My hope is that I had as much an impact on him as he has had on our community and my family. He is second to none in leadership & character.

Dominic: Playing high school football has created friendships that will last a lifetime. Spending so much time towards the same goal with a group of guys really brings you together and creates a brotherhood that I don’t believe I would have been able to get from anything besides high school football. My life would be completely different without high school football. I would not have developed the leadership skills and teamwork abilities that I have gained through football that I will be able to use for the rest of my life.