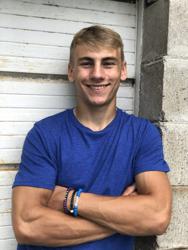 Davis is the captain of Football, Basketball, & Baseball teams. Davis is active in the youth programs at Menomonie in all three sports. Davis is also a math & science tutor at school.

Administrator: Davis has exceptional leadership abilities who cares deeply about the world around him. Davis is an eager learner and though gifted, has quiet humility. He has developed a strong confidence within because of what he has accomplished rather than because of the recognition he has received.

Coach: Davis is a first class citizen and respected as a role model in our school. His outspoken stance toward following training rules and athletic code have inspired other athletes to rethink their views toward following the training rules. Davis’s work ethic is second to none. He has been All Conference, All Region, and HM All State but it is more than his talent that separates him from other gifted athletes. His off the field preparation with film study & weight room are incredible. He has been a shining light in our school. In my 37 years of coaching I would have to say that Davis is one of the classiest young men I have ever had the privilege of coaching.

Davis: I am very fortunate to have gone through the successful & life changing football program at Menomonie HS. Football has provided some of the greatest lessons I have encountered. I am forever thankful for the opportunity to play the sport with such great teammates, coaches, and the support of a great community.  The bonds I built with my boys throughout the course of our football careers is not comparable to other friendships. Many people think the trust and love for one another happens on Friday nights, but that is only where the trust is tested. The trust and companionship starts long before the opening kickoff. The accountability and attention to detail that we display for each other everyday in the offseason, practice, and in film study is where that bond is built. The next layer of trust is built through guys doing the right things, holding each other to a standard such as passing classes, watching film, and obeying code. The icing on top is the daily grind of practice and giving your all no matter what happened earlier in the day. That similar experience and sacrifice is what brought me so close to my teammates. I am honored to have been voted as captain by this group of guys that I look at with nothing but respect.