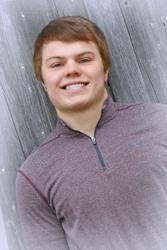 Cayden plays football, wrestling, and baseball. Cayden is in the NHS, Student Council, Band, and Choir. Cayden also has been involved in the community with coaching flag football, food pantry work, and FFA.

Administrator: Cayden has been a great asset to the Black Hawk community and provided great leadership within the school. Cayden always put forth a tremendous effort to improve and develop his skills. He willingly worked to assist those around him to improve their skills and push themselves. Cayden has proven his commitment and drive by his success he has had thus far in his many endeavors. Cayden was the Conference Defensive Player of the Year, 2 time 1st team LB and 1st Team All State winning back to back State Championships.

Coach: Cayden has been around Black Hawk football since he could walk. He has grown up around the practice fields, locker room, and weight room. He has served  as manager since the first grade. Cayden has committed himself to being the healthiest and strongest athlete he could become. The leadership and example set by Cayden played a tremendous part in getting other players to work at enhancing their physical abilities. This year we formed a new coop with Warren HS. Cayden’s leadership was instrumental in building a cohesive team from 2 different schools. As a captain his communication and work ethic helped set the tone for the new players to our program.

Cayden: Football is my family’s life. It has taught me so many important traits such as respect, determination, and ambition.The love of competition is something I will take with me wherever I go for the rest of my life. This upcoming season was like no other, we were no longer a stand alone team and had to coop with Warren, Il . I was not happy with this coop. I did not want to end our journey with a bunch of new kids that I did not know, who did not have success in their program. I feared that they would bring down our program’s success and that their devotion to the game would not match that of my classmates and I. Thankfully, I was wrong. The Warren kids came into our program with great and humble attitudes. We started out as strangers but are now brothers. We lifted weights together, went out to eat, and did so many other activities that built a strong bond. Winning the State Championship was a very satisfying feeling. I was so proud of my teammates and looking around seeing all of the smiles and hugging really brought a tear to my eye. Football has changed me and has made me who I am today.

Cayden plans to go to UW-Platteville and study Occupational Safety